Most people have fillings of one sort or another in their mouths. Nowadays fillings are not only functional, but can be natural looking as well. Many people don’t want silver fillings that show when they laugh or smile because they are more conscious about the way they look. 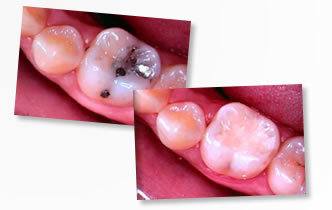 What are amalgam fillings?

Amalgam or silver fillings are the metal coloured fillings that many people have. Amalgam was the traditional material used for fillings for many years.

Are they as good as silver amalgam fillings?

White fillings have always been considered less long lasting than silver amalgam fillings. But there are now new materials available with properties comparable to silver amalgam, and these are proving to be very successful. The life expectancy of a white filling can depend greatly on where it is in your mouth and how heavily your teeth come together when you bite. Your dentist can advise you on the life expectancy of your fillings.

Is it worth replacing my amalgam fillings with white ones?

It is usually best to change fillings only when your dentist decides that an old filling needs replacing. If so you can ask to have it replaced in a tooth-coloured material.

Some dentists prefer not to put white fillings in back teeth, as they are not always successful. One way around this would be to use crowns or inlays, but this can mean removing more of the tooth and can be more expensive.

What are tooth-coloured fillings made of?

This can vary, but they are mainly made of glass particles, synthetic resin and a setting ingredient. Your dentist should be able to give you more information about the particular material that they use.

Where can I get them done?

Most dental practices offer white fillings as a normal part of the treatment they give you. However, white fillings are classed as a ‘cosmetic’ treatment, and you can therefore only have them if you pay for them.

Are there any alternatives to fillings?

Adhesive dentistry is another form of this treatment. This involves bonding the filling to the tooth. The dentist has to remove less of the tooth, which is obviously better.

As we have already said, there are alternatives such as crowns and inlays although they can cost a lot more. Veneers can be used on front teeth instead of crowns or fillings.